With so many options in the world of home gyms, deciding what power rack is right for you may be difficult due to this being a cornerstone for any home gym.

In this article, we’ll look at the MyRack Modular Power Rack with a 2,000-pound weight limit. This is a very capable and solid product. It has a 12-gauge steel body and either a freestanding or bolt-in base; you’re looking at a great addition to your home gym.

What is the Force USA Myrack? 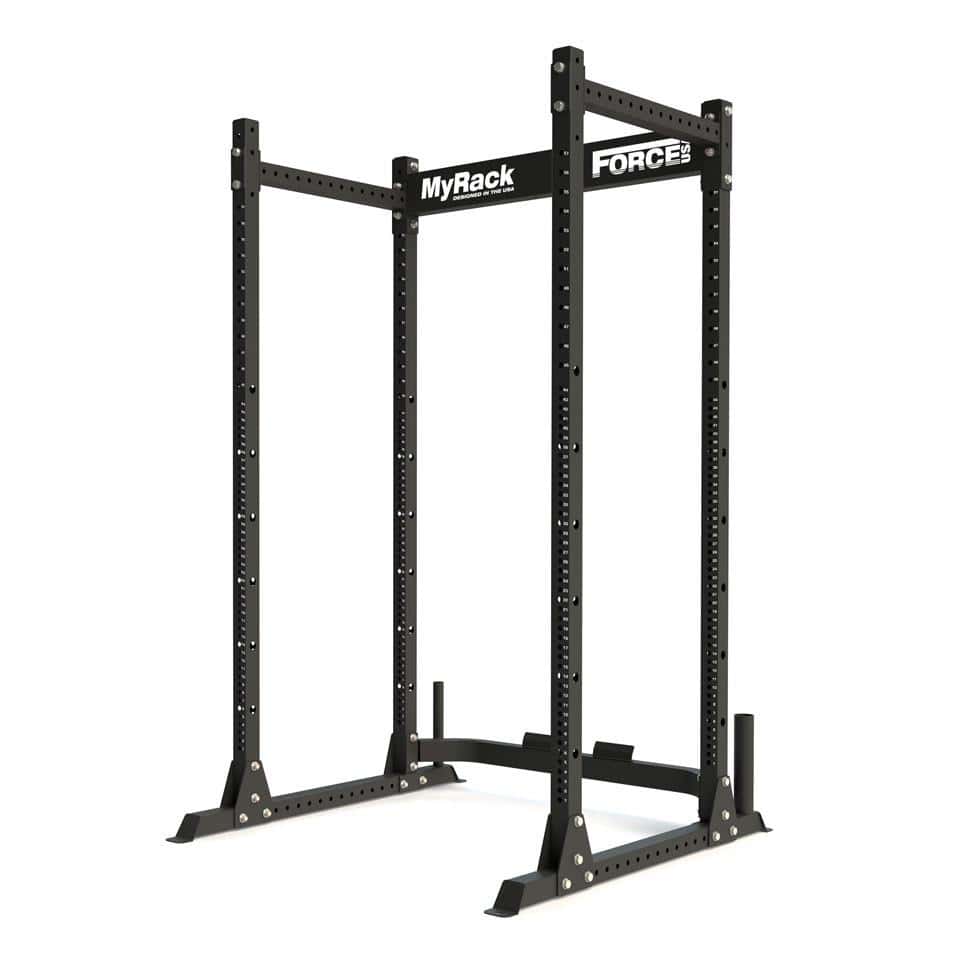 The Force USA MyRack is a cost-effective, yet formidable entry into powerlifting – a well-designed option for those looking to bring powerlifting into their home.

It’s the little things when it comes to buying something like this due to its longevity and everyday use. So let’s get into it and see why the MyRack by Force USA is a solid purchase for beginner and intermediate lifters.

The Force USA MyRack is a versatile power rack that comes with several options of customization and an extra-sturdy construction. It also features a bare-bones rack that’s designed to be fully customizable for whatever needs you might have for your home gym.

You’re getting a different kind of standard when buying from Force USA. Force USA does hundreds of hours of research and development designing products, and it shows.

Buying equipment is no easy choice. The minor, and some major differences in MyRack make this a unique design from other power racks.

What are its Key Features of the Force USA Myrack?

The Force USA Myrack comes in a 12-gauge steel; overall dimensions are a width of 47″, a height of 87″, and a depth of 55″. It also should be noted that the ends of the uprights come in thicker steel. The reason for this is for better support and extra longevity.

The Force USA  MyRack has a total of 54 laser-cut adjustment points with a Westside hole spacing. This means that the MyRack has 1-inch spacing between adjustments on the uprights – down the middle and lower portions.

The Myrack gets it right with this one. The adjustments are, of course, numbered – a feature which seems to be missing in other brands of power racks.

The 1-inch adjustment points reach all the way to the bottom of the uprights and also reach higher than other power racks, making the 1-inch zone significantly longer in comparison. Taller people will appreciate this – height is normally neglected in most workout equipment.

Above the 1-inch-spaced adjustment points are pegs which are 2-inch-spaced. This is understandable due to not needing such flexibility while you are higher up.

The internal depth of the MyRack comes in at 29″, whereas some are only 24″ deep. This is also especially helpful if, in fact, you are taller. This length is ideal for exercises that require you to have more room.

Another great feature are the storage sleeves. Many other power racks or squat racks lack a place to store barbells; the owner often resorts to leaning them against a wall or on the floor. There are power racks that sell storage for an extra fee. The MyRack spares you the trouble, including the sleeves in its model.

The MyRack is very sturdy as well. This is due to having both a stabilizer bar in the rear of the product and free-standing flat feet which have the option to be bolted in the floor. This is for those times you put some major weight onto the bar – you don’t want this equipment falling over.

An important thing to note is that MyRack is more suitable for beginners or intermediates when it comes to lifting. 11-gauge is thicker than 12-gauge, so if you lean more toward an elite or advanced lifter, then perhaps consider something with a sturdier construction.

The hardware and steel construction is very hardy and you can’t go wrong with it if you’re a novice.

One of the better aspects of the MyRack is the versatility in the customization. Force USA has some of the most unique selection of attachments, which, if you purchase the right combination, you can easily get that gym feeling at home.

Some accessories, such as j-hooks, will be needed to place your weights on. Without them, you can’t use your MyRack out of the box.

Attachments to Use With it

One thing about Force USA is that their attachments are proprietary to their own racks, so you can’t use other attachments from different companies. However, having a wide selection of attachments, Force USA likely has the workout for you.

A basic but effective J-Hook is needed for weights, with a weight capacity of 1760 lbs. It’s a good value for a sturdy j-hook. Force USA also sells a deluxe j-hook which is much burlier.

Chin-ups are a staple and Force USA sells four different kinds of chin-up bars. If you were to get a rack for your home gym, a good chin-up bar selection is vital. Thankfully, Force USA sells some of the more popular bars at a reasonable price.

Working on Lats and using cables are a fantastic exercise especially for beginners. Here, Force USA has knocked it out of the park. A good Lat Pulldown is key to beginner bodybuilding and having this right at home is a must.

The Low Row attachment is also a great way to work arms and back muscles. These two attachments are big players and the MyRack would be worth it with just for them alone.

In home gyms, compared to going to a public gym, you are usually going to be working out alone. Working out alone and not having a system for a worst-case scenario can mean a quick trip to the hospital. The MyRack has some of the best safety implements – they are especially handy if you’re lifting some of the higher end weights recommended for the MyRack.

The MyRack is a great choice. It’s one of the better power racks out there, especially if you’re on a budget and just starting out. Not only is it priced very well compared to other power racks, but it’s also a sturdy product with great flexibility.

Handcrafted with by Jamie with the help of Red Bull